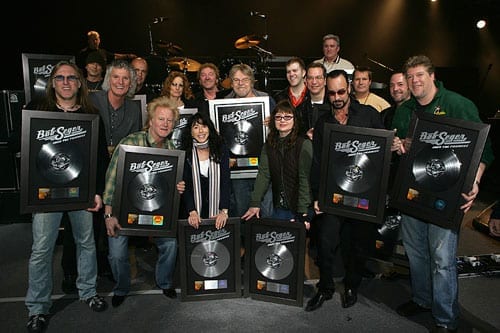 This is so, so cool!

I want to tell you about this picture I got right here, this happened in 2007, when we were doing a gig in Detroit and we were doing sound check and we finished sound check, and now everybody’s going to go off on their own way and some going to catering some going to the dressing rooms and Bill Blackwell’s booming voice comes over, (he doesn’t need a microphone)…

He comes over and says look, hold it, hold it, I want everybody back here on stage, we have an announcement! OK, sure, we all came back on the stage and this couple of guys come out with this whole pile of stuff, and I was starting to wonder what is going on….

The Silver Bullet Band and Bob Seger get their Platinum Record – March, 2007

The office started to pass out the platinum records and he gives all of us, each of us one of our own platinum record which was a platinum record for the Face The Promise album that came out in 2006, and it’s a gorgeous,  gorgeous, as you can see, it’s very, very nice how they put it in there, the framing,  that kind of stuff!! I wonder if it is the “promises” album in wonder if that’s the real album in there….I doubt it, but anyway… I want to tell you who’s in the picture because great minds want to know, and so, to the left we have, and also I want to just say that a lot of people are just kind of bunched up so nobody’s really in a row, so it’s gonna be a little bit confusing, how to tell who is who, but I’ll try to do the best I can…

On the left we have Mark Chatfield then Don Brewer and Chris Campbell, Laura Creamer, me, Shaun Murphy, next to me is Alto Reed and then Jim Moose Brown – kind of tucked in behind him is Mark Byerly then to the left of him is Bob Jensen, Keith Kaminski, John Rutherford, of course Mr. Bob Seger, Craig Frost, then  Barbara Payton and I talked in the back there is Bill Blackwell and next to him is Tim Lamb and then standing at the right side, I don’t know how tall is that….lol, Mr. John Rapp we just love him!!!

So I just wanted to share a special memory of Bob Seger’s last tour with you. Hope you like it…