3 years ago4 months ago

All right now, here it is May 30th, 2019 and this picture, we are at Jones Beach, in NY state! How fabulous does this look? I know we, we played here, gosh, it must have been a few decades ago, ah, before they had this all built up, and it kind of looked like all the pilings on the inside too, it was just a mess, we had to go through some crazyiness to get back stage and all this, but now it’s all brand new and uh, or at least way newer than the last time we were there with Bob Seger. It’s just a wonderful amphitheater and the only drawback was, that night, I think it started raining about 7:10 and it didn’t let up until 11:02, or something like that, and I think we quit at 11:00, and all you people stayed, so great, I can’t believe it, I’m so thrilled that you guys are such great, great fans of Bob Seger, it’s just, it’s been a great ride, and it is a great ride, as you know, we’ve already mentioned some fall dates coming up, in places we haven’t played yet. So, we’re looking forward to that and, hopefully, we’ll see you again on ‘not’ a rainy day, or a snowy day for that matter! 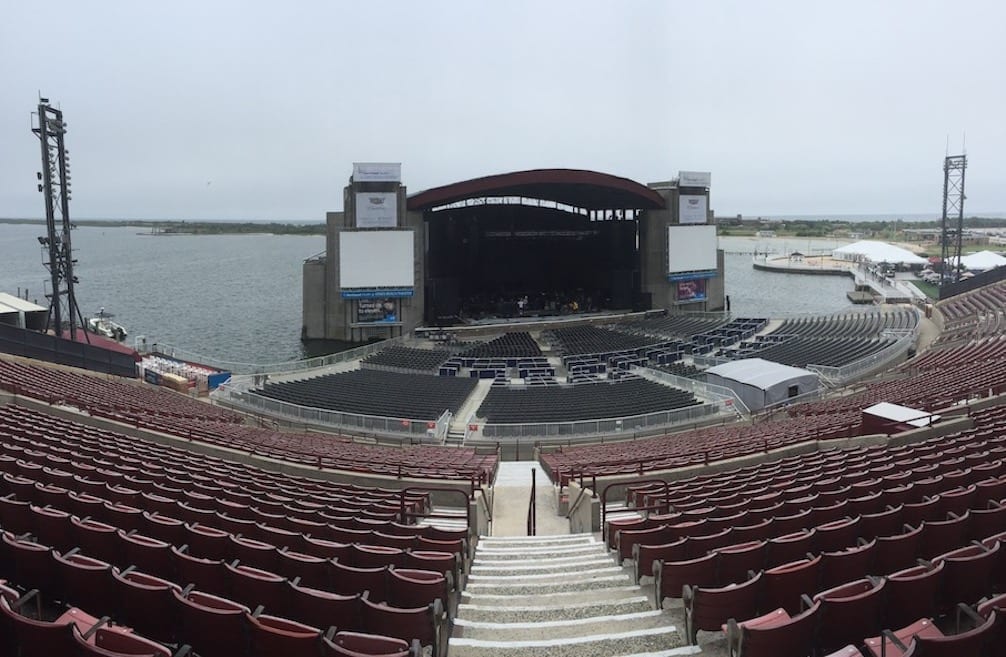 I’m going to go down to this next picture, which is one of our favorite guitar players, ever, Mr. Rob McNelley, and I wanna say that he has won the ACM, which is the Academy Of Country Music artist for best guitar player for last year. He has played on a gazillion records in Nashville and he’s got his own youtube channel, which I’m going to backlink on Rob’s name, once the blog is transcribed and put on the website, so look forward to that he’s just a great, great asset to the band! Next we have the wonderful and powerful Greg Morrow on drums, he’s another Nashville institution, like Rob McNelley, he’s been around for many years, and, originally from Memphis, but he’s been living in Nashville for quite a while, so it’s been great to get to know him, and I kinda like to call him ‘The Hammer’ cuz he sits there and it looks like he’s just not playing very hard, but he is hitting those drums like a ‘bat otta hell’, I wanna tell you that right now. Great guy, sweet, sweet man, and we’re so, so thrilled that he’s on the gig right now. 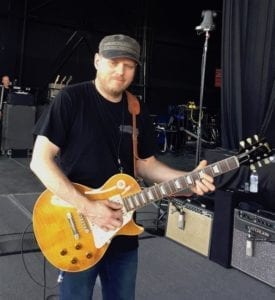 Following that, we have a picture, right before….these next, this next picture, is right before sound check, so, let’s see, we’ve got Keith Kaminski, and he’s one of the Motor City Horns, he plays saxophone, and right down, right below his hand there, you can see Mr. Bob Jensen, who Bob Seger likes to call ‘Screechy Bob Jensen’, he’s on high trumpet, I don’t know how he hits those notes sometimes, it’s way up there. But, next to him have Mr. ‘Smiling Man’, Mr. Mark Chatfield, great, great guitar player, great guy, he’s, he was with us back in the ‘80’s sometime and we’re happy to have him back, cause he’s really a good asset and a fine guitar player, good stuff. 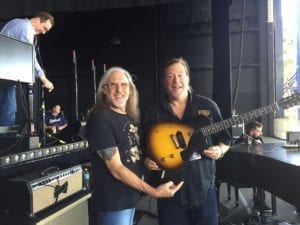 Then, of course, there’s Moose Brown, Jim Moose Brown on guitar, and I wanna say also, he won the ACM for piano last year, although he plays some great guitar parts too, as well. He’s pretty well-versed, and I heard that he plays drums, but we’re not talking about that right now. I’ve recorded at his studio, it’s just been great, he’s produced so many people and I’m just thankful to be involved, whenever I can with his productions! So, next to him, we have Calvin Welshans, audio tech, he’s kinda tuning out the piano for Bob’s microphone and getting it ready for Bob to come out and for us to do our sound check.

On to the PNC BANKS ARTS CENTER, that’s quite a mouthful of a name….I was thinking about going out and taking it from the same angle that I did on Jones Beach, but, this roof over the crowd is so crazy, that I just had to take it from this angle. So, anyhoo, again, the rain, the rain, the rain, it’s that time of years I guess, but, um, had a lot of rain, um, I have to say, the people, you guys are amazing….just stay!! And I saw so many people, all encased in plastic, and uh, I must say you guys come prepared. I can’t say anything less about you, and you’re so ‘gusto’ just lots of gusto coming from the audience at all times, I really appreciate that, and so does Bob.

So that’s the Arts Center, and it had a really good sound, I couldn’t believe…a lot of the amphitheaters are having great sounds. Haven’t been in any in many years, Bob hasn’t played amphitheaters in a couple decades, so, other than Pine Knob, (DTE) we played that, oh gosh, couple years ago which was the first time he’s played an outdoor theater in a long, long, long time, so, these are all refreshing to play, I love it, I just love it.

Okay, here we have our little stage back here, behind, you see Chris’s red amplifiers for his bass, Chris Campbell, this is a shot of Laura’s monitor, and you can see her sticks that she’s been playing the floor toms and the maraca’s, and if you get, if you zoom in you’ll see the list for that night, the set list as well, and then, of course, a couple of my tambourines, that I bash the heck out of. 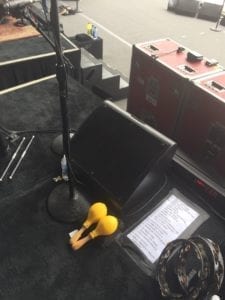 Alright, and this last picture, I guess it must have been about 10 minutes before sound check, ya, so, you can see Greg Morrow’s drums there, and next too him we’ve got, he’s sort of an ‘all ‘round tech, he’s been, he plays, he works with Kid Rock as well quite a bit, but that’s Al Rogozinski, he helps Mark, he helps Bob out a lot on guitars, that’s Mark Chatfield with his back to ya, um, let’s see what else we got here, then we have, of course, Jim Moose Brown, tuning up his guitar, getting ready to, I think the first song we always, we generally do the first two songs to get us going, and I have been singing the first two songs so that they can get the sound straight out in front of house, (FOH) so then Bob comes out and then we do the rest of the sound check. So, what else we got, oh, we got Craig Frost here with his back to us, and then, finally, we have Alto’s tech, who is James Reber, and we are getting ready to play the gig, sound check and everything there in Holmdel, NJ, and Bob’s got his seat there when he does a lot of acoustic stuff, he’s got a seat, he sits down when he plays the acoustic guitar. 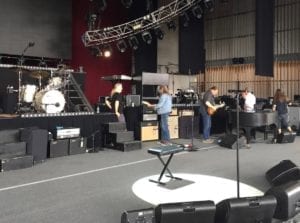